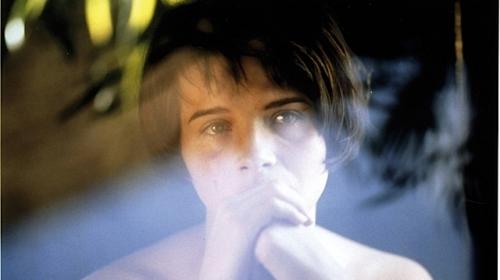 Pages 1-11: Establish who and what the story is about, and suggest tone, place, and time. Subtly, or maybe not so subtly, give a clue to the basic issue to be dramatized in the story.
Blue opens with its title card and swelling music. The next shot shows a tire, from behind, rolling on the pavement. We see three people driving in the car: Julie, Patrice, and Anna.  Anna holds a sucker wrapper out the car window and watches it dance in the wind. The family stops so Anna can use the bathroom. As the car stops we see that the break line is leaking. Between the shot of the tire and the leaking break fluid, it is foreshadowed that this car ride is not going to end well.
At the side of the road there is a young man, Antoine. He is concentrating on a game, trying to get a ball with a hole in it to go on the stick that is attached to it. After several unsuccessful attempts, he gets it, smiles, hears the crash and runs over. The car has hit a tree and is totaled.  A deer runs from the scene and a beach ball rolls from the car.
In the next scene we see the doctor reflected in Julie’s eye. He informs her that both her husband and child are dead. In the next scene, Julie, who is severely beaten up herself, breaks a window in the hospital hallway. As the nurse goes to check on the window, Julie goes behind the counter and stuffs her mouth with pills, in an attempt to end her life. She can’t do it and she spits the pills back into her hand and apologizes to the nurse.
Olivier, Patrice’s partner, comes to the hospital and leaves Julie a television so she can watch her family’s funeral. It is revealed that Patrice was a world-famous composer who was working on the concert for the Unification of Europe. This is also the first glimpse we get of Julie’s mother at the funeral. Julie watches the funeral from her hospital bed.

The first ten pages set up a lot. All but two of the key characters are introduced: Julie, Olivier, Antoine, and Julie’s mother. Though we do not know at the point that the old woman is Julie’s mother, we will realize it later in the film. Aside from characters, the basic plot is defined here, too. We are presented with a woman who has lost everything; she wants to die, but it is not in her to kill herself. What will she do? How can she live like that? How could anyone go on living after facing such loss? The whole film deals with the theme of liberty, but not in the way we would commonly think of liberty. It deals with liberty on a personal level. One is not liberated when they commit themselves to love or mourning and Julie is forced to come terms with this after the death of her family. Notice how Julie looks very sad, but she has not cried.