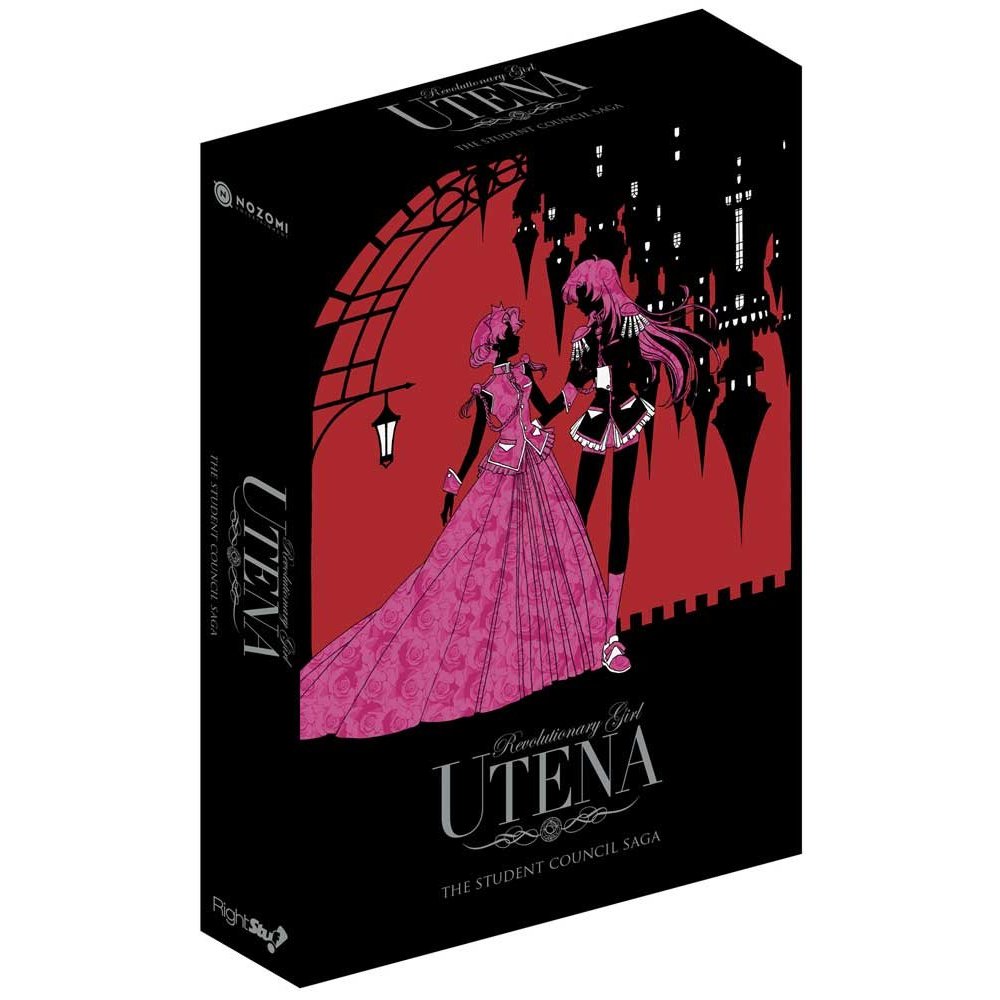 Note: This is a review of the Nozomi DVD release, not the series itself, which is fantastic.
Around the ten year anniversary of the original airing of the ending of the Utena series it was announced that the series would be remastered and released on two DVD box sets, along with a CD box set. These were released in Japan in 2008. Now, Nozomi has started to bring this remastered set stateside in three box sets. This is my review of the first box set.
Video: The video here looks amazing. Having seen this series on VCD, unofficial DVD, and official DVD, I can say without a doubt that this is the best Utena has ever looked. The remastering paid off. Colors that once looked muted and faded now look vibrant.
Audio: The Japanese comes in 2.0 and 5.1. The English is in 2.0. The dub here is taken from the CPM release. I’m not really an audio guy, but the audio sounded great to me (I only watched the Japanese).
Subtitles: I have no issues with the subtitles. They didn’t use honorifics, which I have no problem with, but some people do. They include the Japanese with the English for the opening and ending songs, as well as Absolute Destiny: Apocalypse.
Extras:
Disc One: Clean Opening-Clean Closing One-Nozomi Trailers
Disc Two: Japanese CD Box Set TV Spot-Japanese Remastered DVD Box Set Character TV Spots-Japansese Remastered DVD Box Set 30 Second TV Spot-Nozomi Trailers
Disc Three: Rondo Revolution TV Spot-Rondo Revolution Music Video-Nozomi Trailers
Discs & Packaging: The three-disc set comes in a cardboard art box. The disc themselves come in separate plastic slimcases. Each slimcase comes with an insert. The images used here are the same ones CPM used on their release. The discs themselves feature the rose signet design. 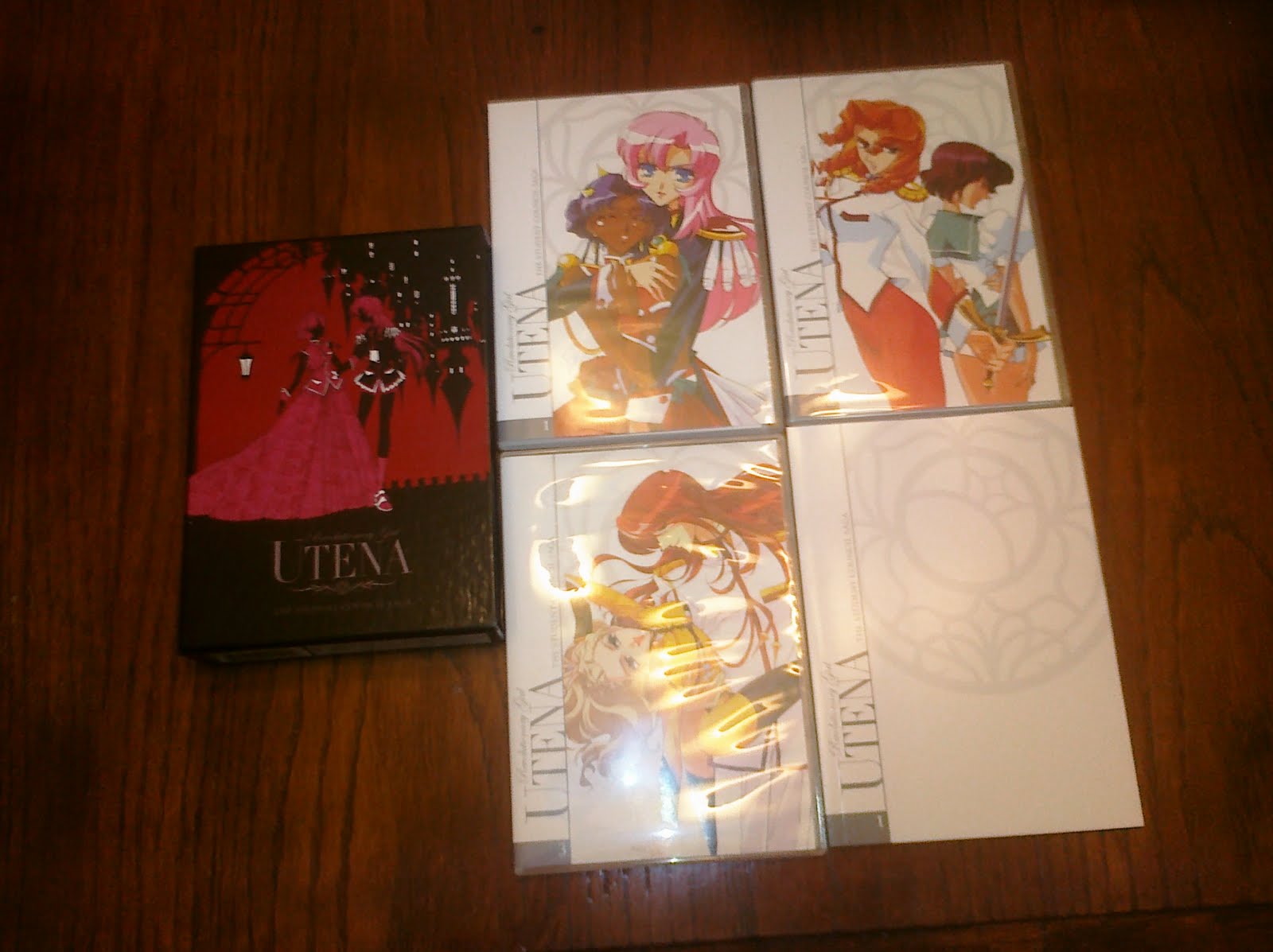 Booklet: The booklet includes:
*Ikuhara’s commentary on all twelve episodes included in this set
*Ikuhara talking about the creation of the opening theme
*Interviews with the staff working on the video remastering
*Interviews with the staff working on the audio remastering
*An article on the manga
*Liner notes from the Japanese Laserdisc release
*Art gallery
Thoughts: Utena looks and sounds better than it ever has before. The booklet contains a lot of interesting information on the genesis of the series, as well the remastering process itself. This is a must-have for any Utena fan. Maybe a little more could have done with the DVD inserts and menus. The inserts are done with images we’ve seen before. I don’t like flashy menus, but these are a little too simple. They also just contain episode numbers, not episode titles.
I’m a little confused as to why this set stops at episode twelve. Unless I missed something, the Student Council Saga includes episode thirteen. Given, episode thirteen is just a recap episode, but I’m still unclear why it wasn’t included. At any rate, this is a really solid set that I feel could have benefited from just a little more effort put into the packaging and menus. It retails for $50, but I got it at Robert’s Anime Corner Store for $30. They have it for the same price at RightStuf, though the price for the second set is higher than at RACS. However, RightStuf is offering a rose signet ring to buyers who buy all three sets from them.
Nozomi did a great job here. This is a must-buy, especially for the price. Utena is a classic and the remastered set looks and sounds amazing. I can’t wait for the Black Rose Saga (my personal favorite) and I really hope Nozomi gets the rights to release the soundtrack box set.
Absolute Destiny: Apocalypse.