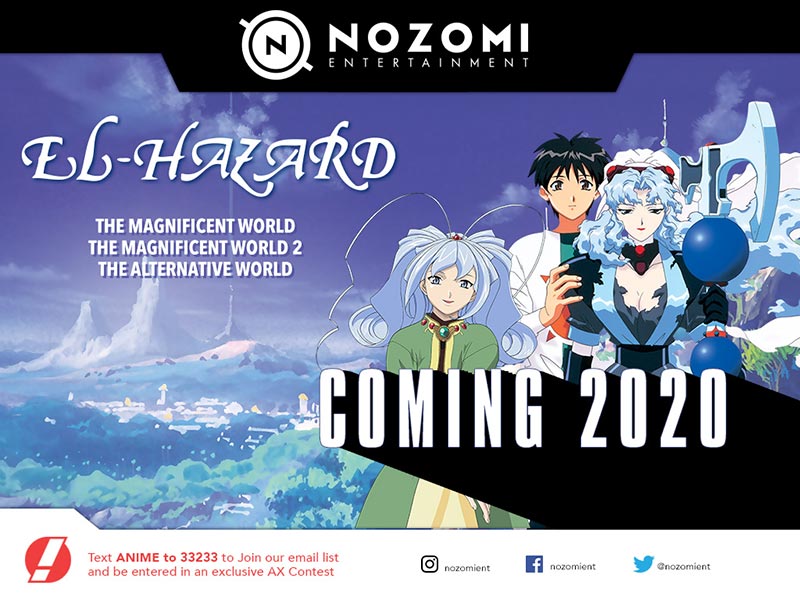 All of these were originally localized by Geneon/Pioneer decades ago. The original OVA series — Magnificent World — is a classic and still holds up really well. It’s sequel OVA — Magnificent World 2 — is pretty bad. The TV series retelling of the original OVA — The Wanderers — is also pretty bad. The other TV series — Alternative World — takes place in the OVA canon and while it’s decent, I’ve never successfully watched the whole thing.

Kudos to Nozomi for giving me the opportunity to pick up the original OVA on Blu-ray without having to import from Japan. I can’t say the other series would be worth upgrading to Blu-ray versions, but if you haven’t seen the original, it’s definitely worth checking out. Maybe this will get people excited for that gritty El-Hazard reboot that’s in the works.

The Magnificent World Blu-ray set now has a release date of 8/3/21. You can preorder here.

The El-hazard OAV series is fantastic. Great animation and well paced, more so than the reboot tv series that goes in a different direction. The first 2 OAV series are wonderful and compliment eachother well. The 3rd series “alternative world” not so much. Worth going through to see what happens for a few characters you love, but otherwise is very disjointed. But if it all comes bundled together… then awesome! Well worth it