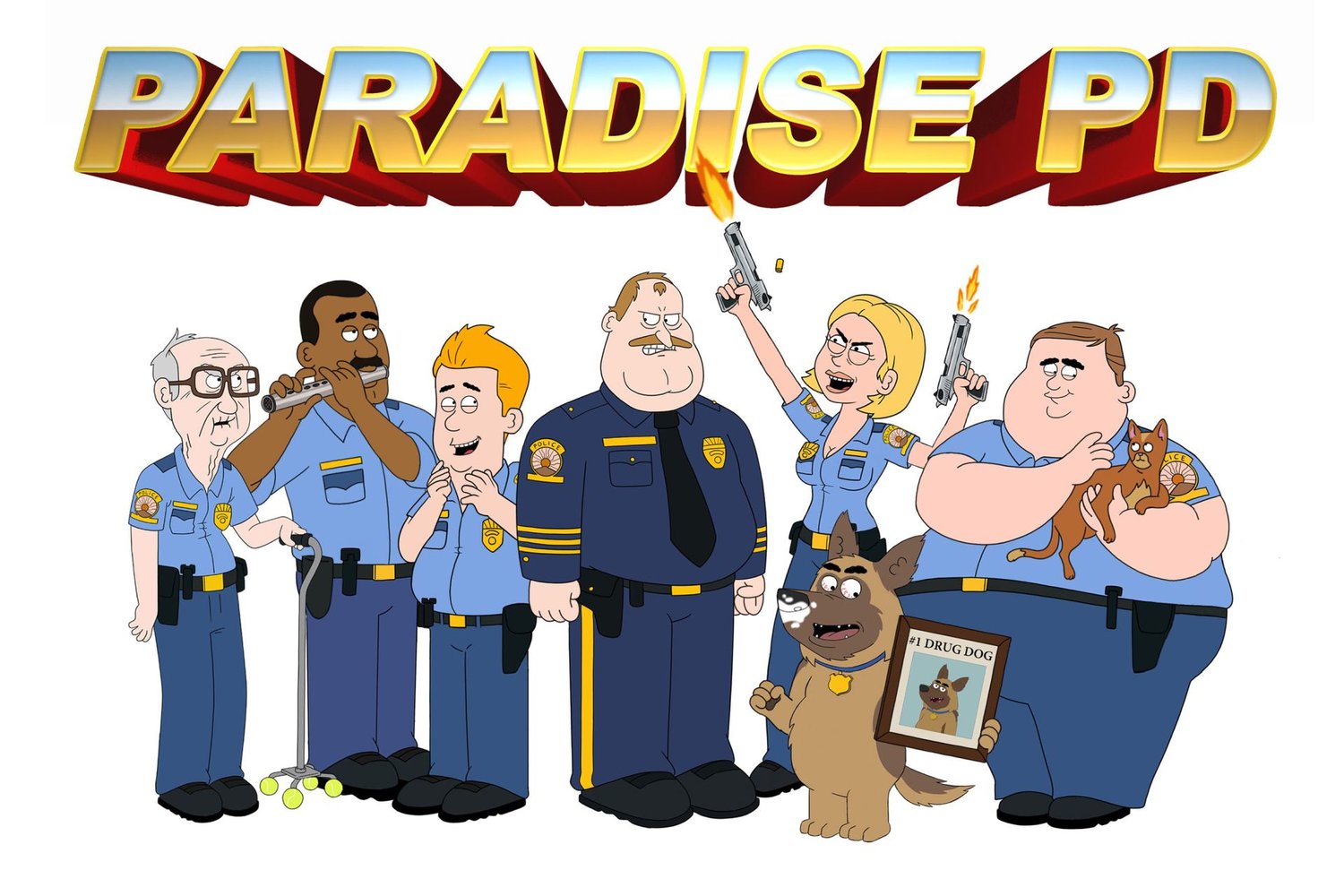 In the beginning, there was this show on Comedy Central called Brickleberry. I never really watched it.  It got canceled. And I guess the creators just got a new show on Netflix called Paradise PD.

The series appropriately follows the misadventures of the police department in the titular city of Paradise. The characters that make up the police department are as deep as any paper plate. There’s black cop, woman cop, fat guy cop, old cop, drug-addicted dog cop, the chief, and his bumbling-but-well-meaning son

Each episode follows the Paradise PD as they solve a case or face a dilemma of some kind. While each episode is mostly independent, there are some ongoing serialized plot threads that come together, especially during the tenth and final episode of this season.

If you’ve seen Brickleberry or even Family Guy you know what you’re getting with the animation. It’s fine. Not particularly outstanding or stylized. The voice acting is good. Most people aren’t likely to recognize any of the stars besides Sarah Chalke (and hopefully that’s from Roseanne and not Scrubs).

This show’s content is very offensive. They make fun of anything and everything: racial stereotypes, mentally challenged individuals, sexual orientations, a bunch of gross sex stuff, etc… The level of offensiveness is the most defining attribute of the show. They don’t hold anything back.

The problem with this is that there isn’t always a point or reason for them to cross the decency line. One episode makes fun of both sides of the Black Lives Matter movement, for example. I think any idea should be able to be made fun of, critiqued, and explored. South Park does this, but they usually have a point to make. And even if I disagree with their point, at least there was a reason behind utilizing the offensive subject matter that makes it worthwhile.

Paradise PD is offensive for the sake of being offensive, so it’s harder to defend. They don’t have a point to make with their crude content. There isn’t strong allegory or solid satire. That being said, with how PC we have become, it is refreshing to see a show that’s not afraid to make a joke.

I probably wouldn’t recommend this series to my friends. I probably won’t think about it much now that I’ve finished watching it. But if I’m honest, I laughed a bunch and did more or less enjoy the five hours I spent with the series.