Again, this is a review of the Nozomi release; not the series itself.

This set contains episodes 13-24, which include the last episode of The Student Council Saga and all of The Black Rose Saga (I don’t get it, either). This set comes in a nice art box, which contains three discs in slimcases, as well as a booklet. 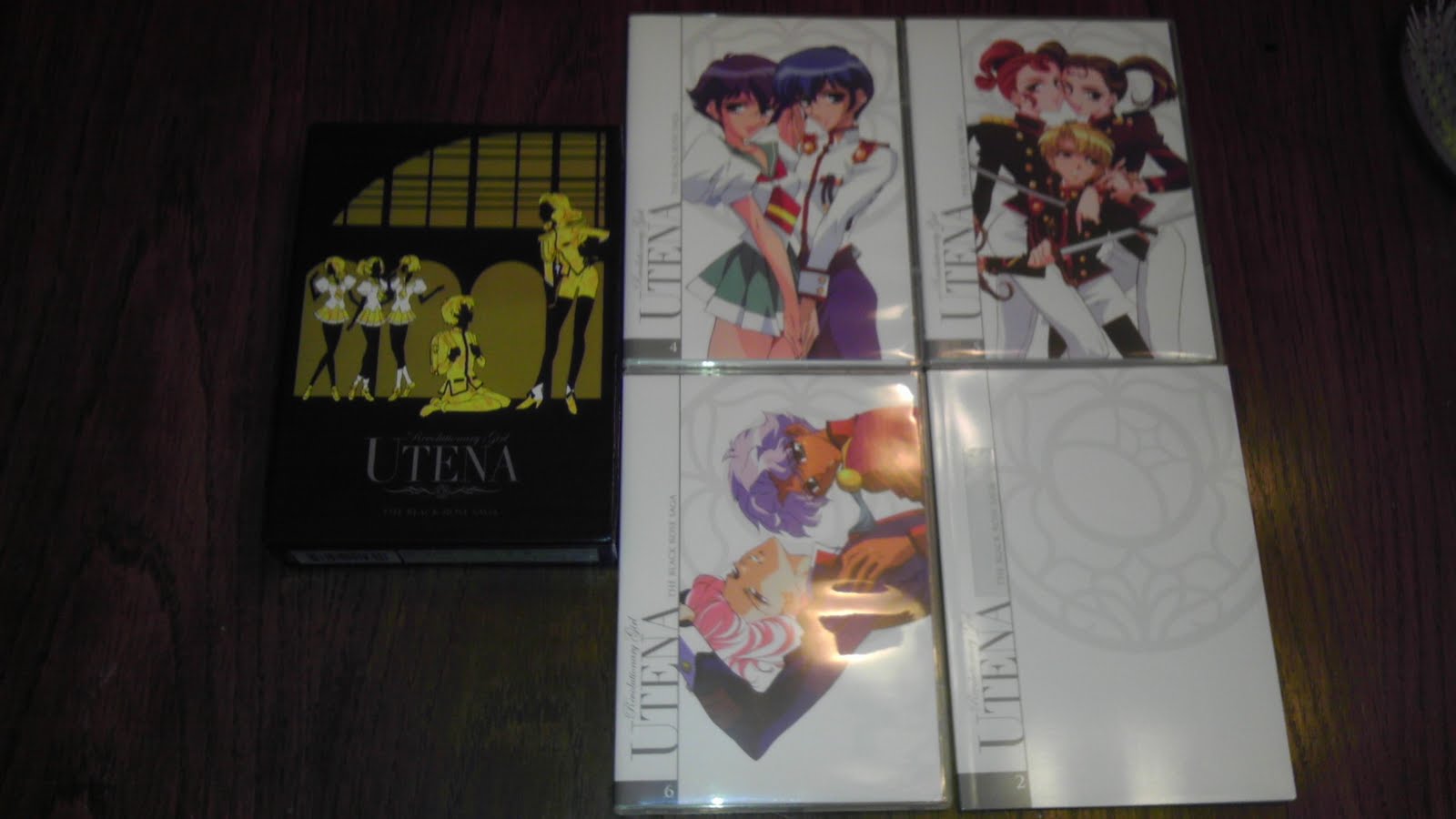 Extras:
Disc One: Animated Storyboards-1997 Utena Japanese Promo-Nozomi Trailers
Disc Two: Kunihuko Ikuhara Interviews 1 & 2, Nozomi Trailers
Disc Three: Kunihuko Ikuhara Interviews 3 & 4, Nozomi Trailers
Booklet:
*Ikuhara’s episode commentary on the episodes included in this set
*The Art of Shichiro Kobayashi, Art Director Interview
*The Two Be-Papas: The Making of Be-Papas Studio, Part 1
*Shinya Hasegawa, Character Designer Interview
*Character Art Gallery
*Rose and Blood: Utena’s Art Style
*Key Art Gallery
*Laserdisc Liner Notes from the Japanese Archives
Thoughts:
The remastered audio and video sound and look absolutely fantastic. I talked more about the audio/video in my review of the first set, which you can read here. Sadly, my friends, this release has some problems. If you look closely at the picture above, you’ll notice that the booklet has a sticker that states this is The Black Rose Saga. They printed all the booklets still saying The Student Council Saga and “corrected” it with a sticker. Some people at the Empty Movement forums have reported the stickers as cheap and peeling off the booklets. Honestly, that’s not so bad, right? It doesn’t stop there. All three of the DVD menus still refer to this set as The Student Council Saga. 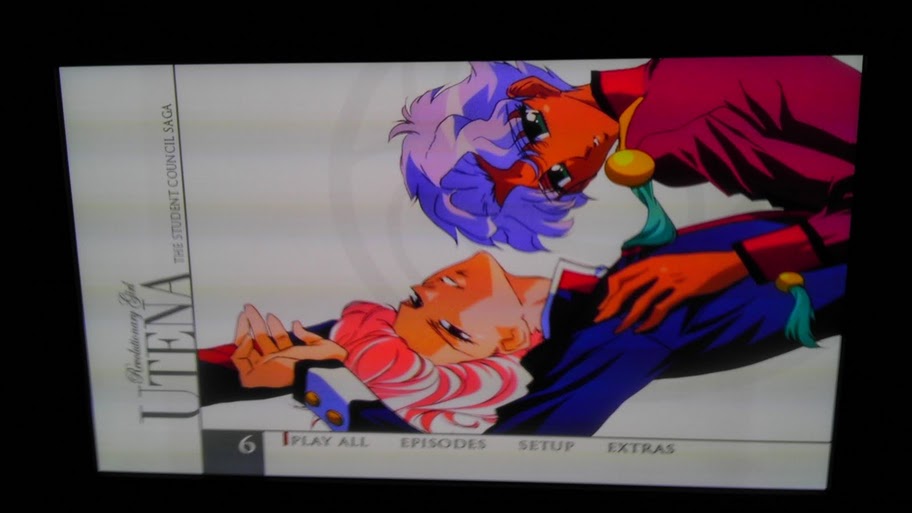 Anyone who knows anything about media production understands that Nozomi used the templates from the previous set and forgot to update some of the input fields with the new title. Nozomi obviously realized the booklets were misprinted before the release and came up the sticker fix. This is also probably why these sets shipped late instead of early, like the previous sets did. I can’t say for sure whether they noticed the menu issue beforehand. Even if they did, if may have been too late or too costly for them to scrap discs that had already been burned and printed over an issue that doesn’t affect the content in any way.
Is it a big deal? Well, not really. It does, however, make this release come off as a lazy and/or rushed one. For some of us, this is our third time buying this series and it’s kind of lame to have to deal with stupid mistakes. Not to mention that all Nozomi had to do here-besides translating the booklet content-was create the artwork and DVD menus. Utena had already been subbed and dubbed. While these errors don’t affect the content in any way, there’s just no reason for them to have been made in the first place. Nozomi has made no comment on these issues. To be fair, I also haven’t bothered to ask them about it.
The extras here are pretty interesting. The interviews with Ikuhara were done by CPM at the Big Apple Anime Fest in 2001 and appeared on CPM’s release of the Akio/Apocalypse Sagas. So if you already own the CPM release, you already have these interviews. The real gem here is the booklet, especially Ikuhara’s commentaries on the individual episodes. His commentaries, much like his interview answers, sometimes offer deep insights into the series and sometimes seem rather evasive. Anyone with more than a casual interest in Utena will find the booklet a very interesting read.
While I’m not reviewing the actual episodes here (I’m sure I’ll get around to it) I will say that The Black Rose Saga is my favorite Utena arc; I had a blast re-watching these episodes.  It’s also worth noting that the discs are labeled as 4, 5, and 6. Does Nozomi already have their sights set on an Utena uber box set? Time will tell…
For anyone interested in this set, I’d recommend waiting a bit and seeing if/when Nozomi will be correcting the issues mentioned. This is a flawed release. The content in these remastered sets is better than ever, but Nozomi missed the mark on presentation.
Absolute Destiny: Apocalypse.
EDIT-12-15-2011: Nozomi is on the second run of this set and all errors have been corrected. If you have a defective set, please contact Nozomi at info@rightstuf.com and they will send you replacements totally free of charge.